WE ARE LAUNCHING SERVICES AND ONLINE CONSULTATION SOON, STAY CONNECTED.

IF ANY QUERY WRITE TO US AT [email protected]

New tax regime vs Old tax regime: How to choose the better option for you?

In the 2020 budget, FM Nirmala Sitraman announced an income tax declaration scheme called a new tax regime with more tax slabs and lower tax rates. However, the new slabs came with the catch of removal of all the deductions and exemptions available.

The FM gave taxpayers a choice between the new regime and the existing one, leaving it to them to decide which they would like to opt for. The Taxpayers can choose between old and new regimes by filing Form 10-IE.

As per the new regime, new income tax rates and slabs will be applicable for those who give up tax exemptions and deductions. In simple terms, this scheme is beneficial to all those taxpayers who didn’t invest their money.

Ever since the announcement, taxpayers have been confused about whether they should stick to the old regime which offers the benefit of exemptions and deductions, or switch to the new regime which has low tax rates. Taxpayers are still wondering whether the new personal tax regime will really bring substantial tax relief.

In case of Rs 1.5 lakh deduction 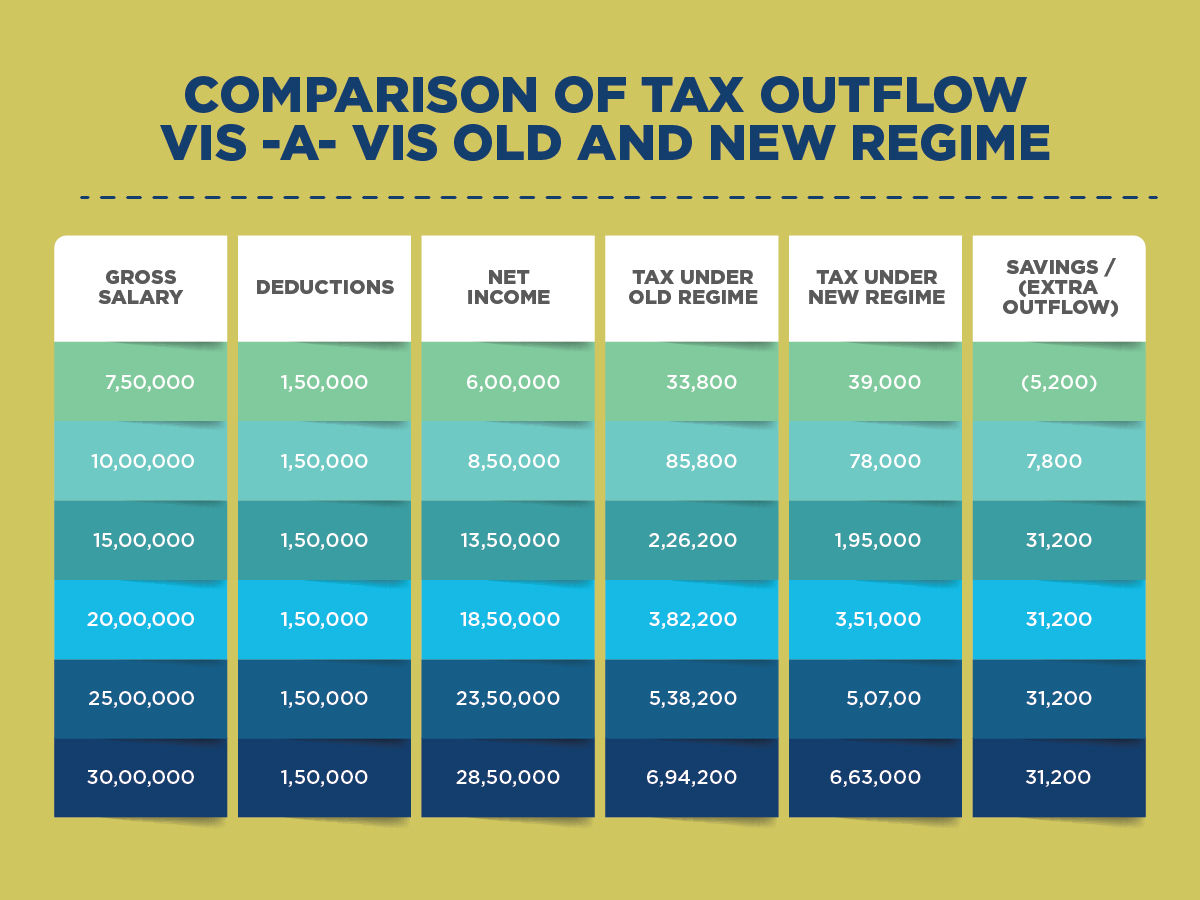 In case of Rs 3 lakh deduction 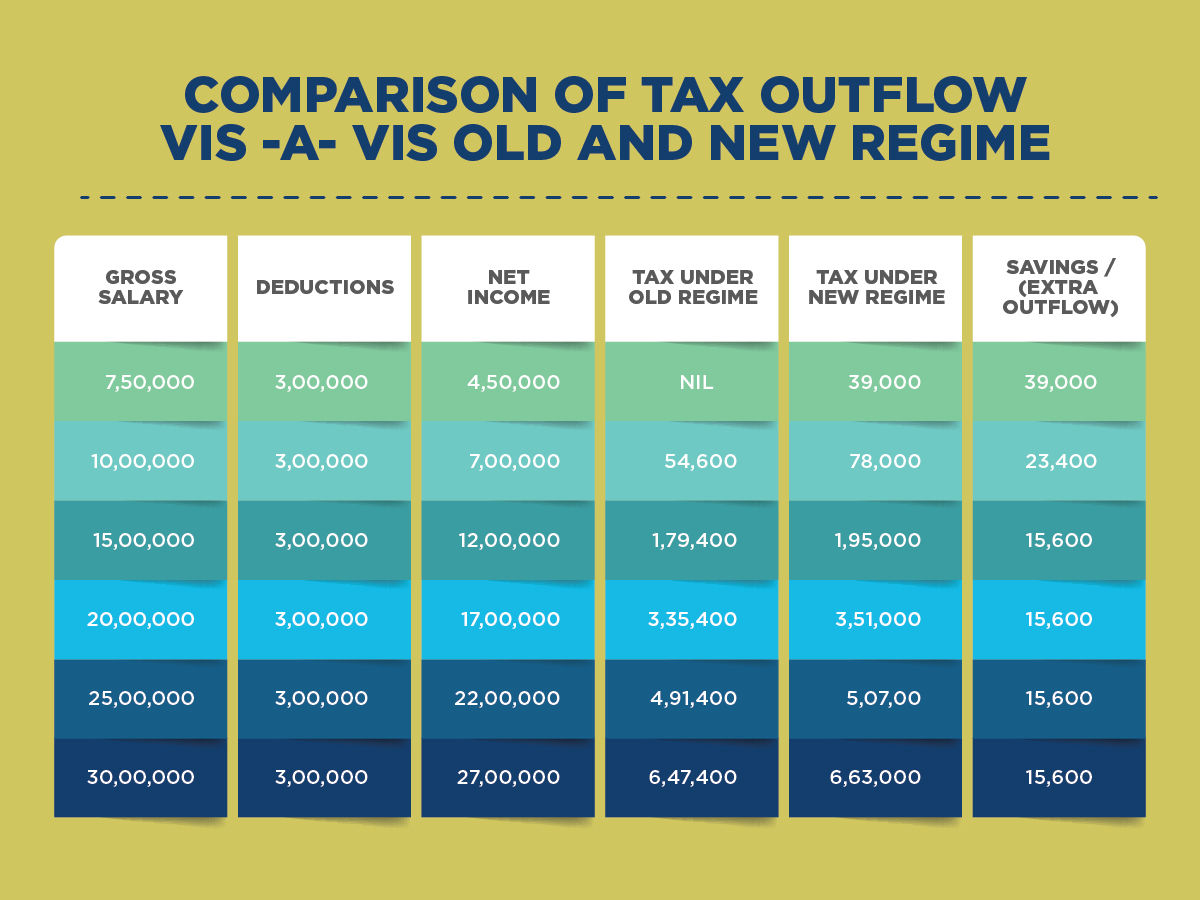 In order to help taxpayers make an informed decision by calculating and comparing their tax outgo under both the old and new tax regime, the income tax department has an e-calculator on its e-filing website which can help people. While the new tax regime has lower income tax rates, income tax exemptions and deductions have to be foregone.

This calculator is only meant to provide a basic idea of the estimated impact of the new provisions. For the actual provisions and eligibility, one has to refer to the Income Tax provisions. All tax calculations (includes cess) are excluding Surcharge and total eligible exemptions/deductions are assumed to be zero in the new regime.

The estimated Annual Income is not applicable for any Income with special rates. Deductions and Exemptions are eligible as per Old regime. Before making a comparison and taking a call in regards to your savings, make sure you have a proper financial plan in place.

Bank Bazaar CEO Adhil Shetty has shared the 20% formula which can help taxpayers decide on which regime to choose. As per the formula. if you can claim a deduction of 20% on your income, you are better off remaining in the old regime. In order to decide, first, you must have an estimate for the income you hope to generate in the financial year from various sources such as salary, business income, capital gains from investments, interest from bank deposits etc. The next step is to take stock of all available deductions.

You can legally avoid taxes through qualified investment, insurance and expenditure. For example, PPF investments up to Rs 1.5 lakh are qualified for tax-saving investments. Life and health insurance premium also qualify for deductions. Expenses such as children’s school tuition fee, rent paid, and certain healthcare expenses all help reduce your taxable income. There’s also the standard deduction of Rs 50,000 for salaried individuals.

The next step is to apply the formula. Do your total deductions add up to 20% of your gross income? Let’s say your income is expected to be Rs 7.5 lakh. So do your various deductions add up to Rs 1.5 lakh? If so, it’s quite likely that you have enough deductions to benefit by remaining in the old regime because your taxable income will be lower.

To understand better, lets take for intance income of Rs. 7.5 lakh. If your taxes under the old regime were Rs 65,000 assuming no deductions, in the new regime, your taxes on the same income reduce to Rs 39,000. But in the old regime, if you had claimed deductions of Rs 1.5 lakh, your taxes would be the lowest at Rs 33,800.

There is no single answer to this. Prima facia, it can be seen that taxpayers who do not have many deductions to claim can opt for the new regime, and those who have substantial deductions to claim resulting in lower tax can continue with the old regime.

Looking at the reduction in the tax rates in the new regime, the first reaction would be that the new system looks better. However, with these cuts, someone with Rs 7.5 lakh income will have to pay Rs 25,000 and for those who are earning Rs 10 lakh income, the tax saving will be Rs 37,500. For these savings, you will have to let go all the exemptions and deductions which might nullify these gains.

As an individual’s income level increases, they would be able to claim these and other deductions to the maximum amount allowed. A senior citizen can claim several other deductions including for medical insurance premium/bills under section 80D up to Rs 50,000. Since the investment, deductions will vary person to person, the choice between the two regimes will be personal. One has to calculate their tax under both regimes and compare before deciding on one.

Do you have to show your assets in your income tax return?

What Are the Tax Implications on Income from Foreign Stocks in India?

GST Hero - September 22, 2021 0
E-way Bill is an essential document required to be generated whenever some movement of goods is involved from one place to another. Whether the movement...

12 Things You Must Know About Public Provident Fund (PPF)

Guest - September 19, 2021 0
Public Provident Fund or PPF has been one of the most popular investment options in India. There are many reasons for the popularity of PPF including...

Pradeep Sharma - September 18, 2021 0
An income tax return is a yearly statement that declares your income and taxes paid during the year to the income tax department. It...

Disclaimer:  Every effort has been made to avoid errors or omissions in this material. In spite of this, errors may creep in. Any mistake, error, or discrepancy noted may be brought to our notice which shall be taken care of in the next edition. In no event, the author shall be liable for any direct, indirect, special, or incidental damage resulting from or arising out of or in connection with the use of this information.

12 Things You Must Know About Public Provident Fund (PPF)